skip to main | skip to sidebar

Nice, if you pleace. 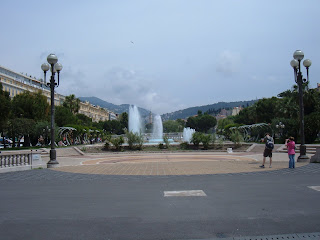 If you haven't been to Nice, or any other spot in the South of France, you should know that it's really beautiful. It's an amazing mix of French culture with other Mediterranean influences. Lots of Italian touches (especially in the food). Some Spanish flavors creeping in, as well. 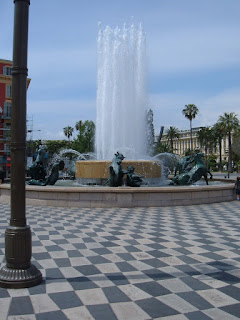 An event I attend annually takes place in the main convention center in Nice. Though Nice is a two-hop flight for most North Americans, it's an easy journey from most European cities. I generally fly through London, but others opt for Paris, Frankfurt, Amsterdam, etc.

The architecture is pretty neat there. I posted a lot of it in my blog post about Nice last year (which I'll link later), but it's a cool mix of the above influences, plus a weird sense of past-its-prime modernism. The whole city looks a little mildewed in spots and rough around the edges, but it's an amazing place, overall. There are Roman ruins, casinos, yachts, beachfront hotels, and other ridiculous bits and pieces.

My activities this year included a black-tie gala, a beachfront party, a rooftop party, and a late-night pool hall session. And the food! The food was amazing. A sort of French-Italian-world-foods amalgamation of deliciousness. All great stuff.

Most of the trip, though, was just work. Meetings. Conferences. Nothing too exciting. 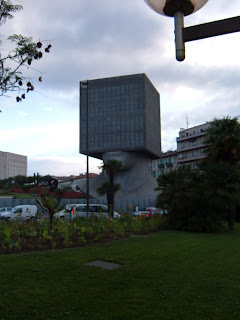 Here's a photo of the outside of the tiny little hotel I stayed in. It's basically a bed and breakfast. It's one floor of an apartment building, and I love the place. I stayed there last year, too. This year I got the Dali room. 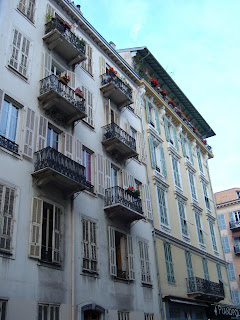 The window just to the left of that top balcony was my room. This was the view. 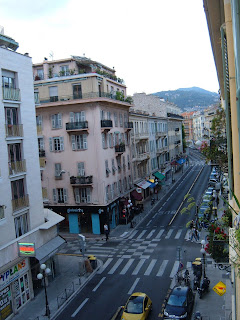 Getting to Nice was easy peasy. Staying there was lovely.

Man! It's been an intense week. I'll tell you all about it as we go, but I'm going to break it up into a few small doses. 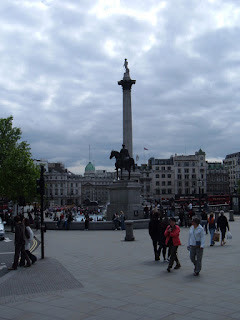 Saturday (5/17), I boarded a flight at O'Hare around 6pm. (Kudos to my buddies Matt and Virginia for taking me to the airport. Big ups.) I took a little valerian root (Merz Apothecary recommended it. It was a big help. Better than narcotics or hormones.), ignored the terrible movies they were showing (Oh boy! 27 Dresses AND National Treasure: Book of Secrets! Followed by The Golden Compass?!?!?!?! Is this a flight to LONDON or HEAVEN!?!?!?) and spent most of the flight either sleeping, reading, or talking to my awesome seat-neighbor. (Part-owner of a Sri Lankan tea plantation. I want that job.)

I arrived in London the next morning. (The local clocks said 9am. It was still 3am in Chicago, but getting a little sleep convinced me that I had time traveled.) My buddy Liam gets the award for awesomeness for meeting me at Heathrow. We took the train into Paddington, and then hopped a double-decker for the ride to his place over by Canary Wharf. That took us right through the thick of things. Not the quickest route, but certainly the coolest.

We grabbed some Carlsbergs and made our way through the super-modern bank complex that is Canary Wharf. (Watch 28 Weeks Later. That's it. Isle of Dogs.) Liam lives right by the O2 Dome and the Reuters Building (which was the CIA hq in 0ne of the Bourne movies).

Here's Liam in front of the building where he works. 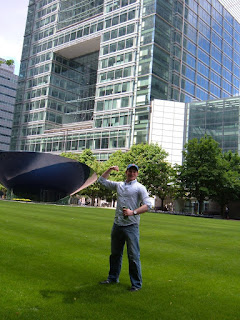 And a shot of me with the O2 Dome in the background: 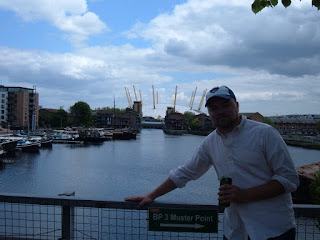 We hopped on a boat and made our way up the Thames to Embankment. Along the way we spotted the Traitors Gate at the Tower of London: 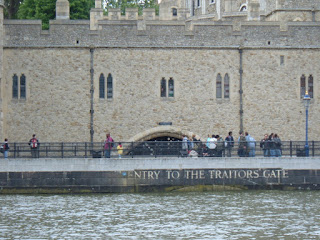 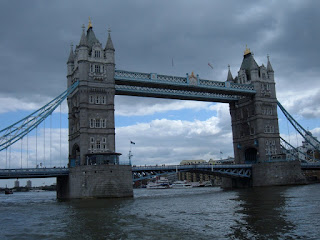 And some more modern bits and pieces of London: 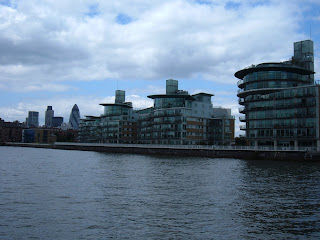 After getting off the boat, we puttered around town. We hit Trafalgar Square (the first pic in this post), Covent Garden, Chinatown (below), SoHo, Five Points, etc. We popped up to Harrod's. We went all over. 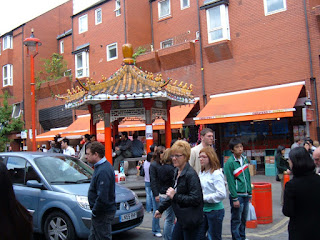 We made our way up to Camden to check out an area with a different feel. We walked through the crazy market stalls and into the all-too-hip stores, surprised that people still buy rave clothes. Who goes to raves? It's right by a really pretty section of canal, though. 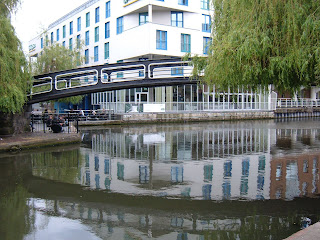 There's a cool set of manual locks right on the canal. I was too close to get a good picture, but these houseboats will motor right up to the locks and a dude from the boat will hop out (drinking a beer) and begin the process of opening the locks for an incoming boat. There's no one on duty. No control booth. I have a feeling that wouldn't fly in the States. 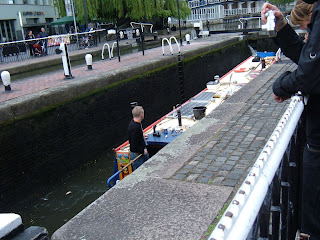 We had a few pints in Camden and hopped the tube back to Liam's. We had some grub (frozen pizzas, boyee!) and hit the sack. I had to grab a taxi for Liverpool Station, then a train to Stansted Airport, and a plane for Nice very early the next morning. (Cab left at 4am. Yowza.) I made it, though. London was very good. It was even a nice day for us. A tad cloudy, but really warm. Thanks, London.

I'm writing this from a cafe in Nice. I don't have my camera USB cable, so I can't post pictures yet. I will say, however, that London and Nice have been lovely.

I hope to head towards the States tomorrow, but there are rumors of an airline strike.

A few highlights that I'll tell you more about later:

- I won a fancy bottle of wine at an event. I didn't drink it yet.
- Food, food, food. Everything I've eaten has been delicious. In Nice, anyway. London? Less so.
- I NEED to get more than 3 hours sleep some time soon.
Posted by Tim at 11:57 AM 1 comment:

So I'm about to embark on a few months of travel and such. I'm leaving Chicago tomorrow (Saturday the 17th), and will visit the following before returning:

London
Nice (for work)
Charleston (Fowler Family at Spoleto!)
Various other locales in NC and SC
Sarasota, FL
Some other area of the Gulf Coast of FL
Vegas

... I think that's pretty much it. My bags are packed and my Pops is taking care of my cat. We're all set.

I'm going to start blogging again during the trips.